Jude Fawley is a working-class man who aims to change his life by becoming a scholar. He falls for Sue Bridehead, a beautiful, free spirit – and his cousin. Though she marries someone else, Jude turns his back on his ambitions, and pursues a passionate, illicit relationship with Sue – one which can only end in tragedy. 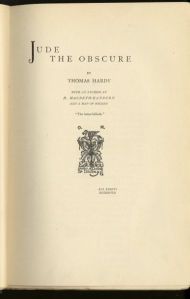 The last of Thomas Hardy’s completed novels, “Jude the Obscure” – the collected serial took this as its final, and most memorable, title – was published when he was 55.

With its seeming attack on conventional mores, marriage, and its matter-of-fact treatment of sex, the novel was often called “Jude the Obscene”.

Hardy was no stranger to controversy in the Victorian age, and his works embodied characters struggling against social norms and their own passions. 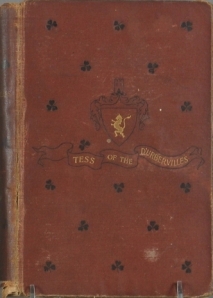 Front cover of original edition of “Tess of the d’Urbervilles” by Thomas Hardy (Harper & Bros) 1891.

Subtitled A Pure Woman: Faithfully Presented, “Tess of the d’Urbervilles” was initially refused publication – and when published, attracted similar controversy for its sympathetic portrayal of what the Victorians considered a fallen woman.

Tess Durbeyfield, daughter of peasants, is sent to the baronial d’Urberville family when her father is told of a family-name connection. In reality, there are no familial relations, and Alec d’Urberville takes advantage of Tess’ presence to obligate, and then seduce her. She flees and finds temporary solace, but cannot escape Alec, or her past.

A similar first edition of “Tess of the d’Urbervilles” – but in presumably better condition – was described as being gifted to Anastasia Steele by the enigmatic Christian Grey.

Ana and Christian, of course, are the protagonists of the book “Fifty Shades of Grey”.

The E.L. James trilogy, beginning with “Fifty Shades”, was originally titled “Master of the Universe”, and was written as fan fiction based on the “Twilight” vampire angst novels written by Stephenie Meyer.

Unfortunately, as I’ve not yet read the book, I’m not qualified to present a 55-word précis.

Grey handcuffs from the 19th century, from Bedfordshire, UK.

I was in a bookstore the other day, and the display tables were covered in pyramids of “Fifty Shades of Grey” and “Twilight”.

(Yes, I still go to bookstores, despite buying hundreds of Kindle ebooks and most of my own poetry books only being available in digital form.)

Going through the shelves, I stopped to admire the poetry of Margaret Atwood, of which, at this writing, she has twenty volumes.

I pulled out “The Journals of Susanna Moodie” and leafed through page after page of indescribable beauty, pain, insight.

Every poem was a poem I wish I’d written.

And yet, of Atwood’s array of volumes on the shelf, all iconic titles – “The Edible Woman”, “The Journals of Susanna Moodie”, “Surfacing”, “Life Before Man”, “The Handmaid’s Tale”, “Cat’s Eye”, “The Robber Bride”, “Alias Grace”, “The Blind Assassin”, “Oryx and Crake”, “The Year of the Flood”, “MaddAddam” – only one was poetry.

Twenty books of poems, and only one on the shelf. 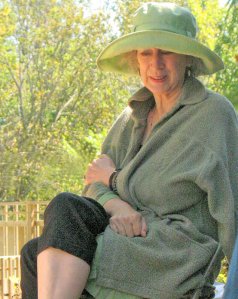 Margaret Atwood at a reading at the Eden Mills Writers’ Festival 2006, Ontario, Canada, in September 2006.

Like Atwood, Hardy gained fame as a novelist with books that have become classics – “Far from the Madding Crowd”, “The Return of the Native”, “Tess of the d’Urbervilles”, “Jude the Obscure”.

Despite this, Hardy regarded himself primarily as a poet, and wrote poetry over his entire life.

He claimed poetry as his first love – but he also said “A lover without indiscretion is no lover at all.”

Yes, poetry is my first love…

But now – after poetry on Twitter, Blogspot, Tumblr, WordPress; articles for amazing poetry communities; publications in literary journals; an award-winning print chapbook; Kindle books I’m grateful that people deigned to buy; and one forlorn manuscript still sitting in the middle of a publishing house’s in-box –

I’m ready for an indiscretion.

—–
Tonight, I invite you to contribute your own 55-word poem.

Yes, that’s the only rule: The poem (not including the title) should have 55 words, no more, no less.

It’s not required, but if you wanted use a metrical or rhyming framework to the poem – to differentiate it from 55-word prose – it would be amazing.

And folks, let’s link to the G-man and other 55-word groups, and help bring together communities meant to encourage a love affair with writing.

I hope you’ll join me in tonight’s affair. Thank you.

—
Samuel Peralta – on Twitter as @Semaphore – is the author of five titles in The Semaphore Collection, all Amazon Kindle #1 Hot New Releases, and best sellers, in poetry. As well as an award-winning poet, he is a physicist, technology business leader, mobile software developer, songwriter, and indie film producer.

If you’re curious as to where his indiscretion is taking him, please join the free Semaphore | Art & Craft newsletter.

Images public domain / via WikiMedia Commons or as attributed.

113 thoughts on “Form for All: Fifty-Five Shades of Grey”