Robert Frost’s poem STOPPING BY WOODS ON A SNOWY EVENING is an iconic poem. In my copy of Louis Untermeyer’s Modern American Poets, he quotes Frost as saying the poem was “my best bid for remembrance”.  I’ve always loved the form, the easiness, and I suppose the “American-ess” of it. There is light and dark, mystery and sweetness, and a winter beauty complete with a winter solstice snow and a horse and rider in silhouette.  Here is a copy of the entire poem: 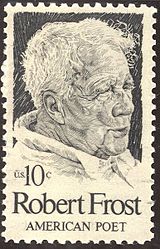 STOPPING BY WOODS ON A SNOWY EVENING

Whose woods these are I think I know.
His house is in the village, though;
He will not see me stopping here
To watch his woods fill up with snow.

My little horse must think it queer
To stop without a farmhouse near
Between the woods and frozen lake
The darkest evening of the year.

He gives his harness bells a shake
To ask if there is some mistake.
The only other sound’s the sweep
Of easy wind and downy flake.

One Horse Sleigh
from Wiki-Commons

Written in June, 1922, he had only just finished his long poem New Hampshire which had taken him quite some time. Wikipedia claims the idea and poem came over him as a sort of hallucination. I was told in my lectures on Frost, that it was an image that seized him and he wrote it down immediately, only doing a little bit of revision before sending it off.

He wrote it in iambic tetrameter, shaping the poem in Rubaiyat stanzas originally created by Edward Fitzgerald. Each verse (except the last) follows an a-a-b-a rhyming scheme, with the b line in each stanza setting the main rhyme in the following stanza  making it a chain rhyme. The end result is a rhyme scheme of AABA-BBCB-CCDC-DDDD.  It was a kind of genius to repeat the last two lines in this particular poem because the repetition adds to the mystery and the metaphor.  However, when using this pattern for your poem, I don’t think that would be a requirement. The natural thing would be to invent another line, yet ending in the same rhyme. There is a beautiful order here of four stresses or beats to the line, four verses with four different rhymes laced together.  I think that is why this for me and so many others is so satisfying.

Frost’s poem has been used in several eulogies.  I think it is ideally suited to giving depth and meaning to a subject. I have used it once myself with some success. My co-worker Mona asked me to write a poem for her. I had put it off for a while but when her birthday came up, and I had some dead time one day, I wrote it for her.  It has been published a couple of times and you could find it on my blog, but I will reprint it here to show you what I did with it, and see if you find it as compelling as a form as I did.  I hope you will use it to write a new poem. I think you will be pleased with the results.

Remembering her life unplanned
A window that was her dreamland
She left a bleak and cruel life
To build on rock instead of sand.

She walked through streets of hate and strife
Where words cut deeper than a knife.
She kept her thoughts as straight as pins
From child to mom; from girl to wife.

To learn!  The key to those big wins
With judgment keen and sharp as fins.
When truth was poured into her soul
It washed away her stinging sins.

Her life had been an empty bowl,
Though failures took a grievous toll,
Each year she gains more self control;
Her faith renewed now makes her whole.
by Gay Reiser Cannon

The challenge is to write a poem in this form. Click on your address line and copy that onto Mr. Linky. Read and comment on your fellow poets. If looking for their poems, check back to Mr. Linky, (the blenza page) and click on their links.