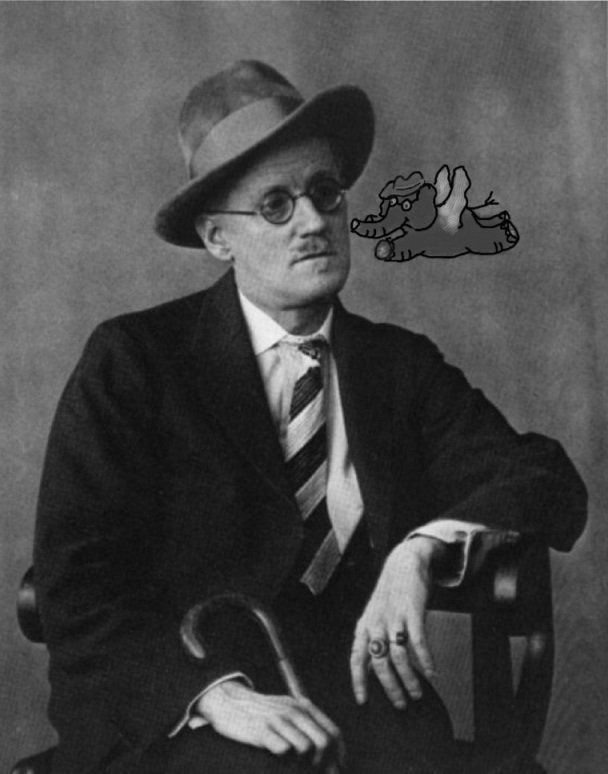 Manicddaily (a/k/a Karin Gustafson) here to tell you why June 16th is one of my favorite days of the year.

Bloomsday, for those of you who are not fans of James Joyce, is the anniversary of June 16th, 1904, the day that Joyce immortalized in his ground-breaking novel Ulysses (published in 1922). The novel, for all of its 700 pages, manages to happen entirely on that one day, as Joyce tracks his characters Stephen Dedalus, Leopold Bloom and Molly Bloom through the streets, shores, pubs and bedrooms of Dublin (and, more importantly, through the mazes of their own brains.)  Although Ulysses was banned in both the U.S. and England for years following initial publication, Bloomsday is now celebrated more or less worldwide, with public readings of portions of Ulysses, and sometimes even the whole book.

Although Dublin itself is central to Ulysses (and to everything Joyce wrote), he left Ireland as a young man in an act of self-imposed exile, living primarily in Trieste, Paris and Zurich, dying in Zurich in 1941.  (His last short visit to Ireland was in 1912.)

Which brings me to the subject of today’s prompt: exile.

Exile, like love, transgression, death, is an archetypal storyline.  On the religious front,  Adam and Eve are thrown out of Eden, Cain is banished from the face of Jehovah, Lucifer tossed out of Heaven; even Buddha. as Siddhartha, must leave home and family to find enlightenment.

On the purely literary side, Romeo is banished to Mantua, Hester Prynne from polite society; Odysseus (Ulysses) is forced to wander about the Aegean for twenty years.

Much of the literature of the U.S., Australia, and almost any place once colonized or occupied, grapples with exile, both as experienced by immigrants and native inhabitants.

(And let’s not forget Bilbo and Frodo of Hobbit fame, sailing off towards Valinor, which we now know from the movies is some secret corner of New Zealand.)

Exile is not only a subject matter, it has been the fate, or choice, of many poets and writers.  Some, like Joyce, and others of his time period, voluntarily bee-lined it to Paris, a place where they felt they could write more freely, while also brushing up against each other.

Other poets and writers have been literally banished.  An example is Ovid, the great Latin poet, officially dispatched from Rome to Tomis, on the coast of the Black Sea, because of the displeasure of the Emperor Augustus with his love poems. In Tristia, a heart-rending book written from exile, Ovid struggles with loneliness, fear, homesickness and, of course, poetry, the source of his trouble, the source of his relief.  One complaint is that “writing a poem you can read to no one is like dancing in the dark.”  In one of the poems of Book V of Tristia (as translated by A.S. Kline), Ovid explains further:

I ought to have nothing more to do with verse,
one shipwrecked I ought rightly to avoid all water.
And if I were mad and tried the fatal art again,
consider if this place equips me for song.
There are no books here, no one to lend me an ear,
or understand what my words signify.
Everywhere’s filled with barbarism, cries of beasts:
everywhere’s filled with the fear of hostile sounds.
I myself have already un-learned Latin, I think,
now I’ve learnt to speak Getic and Sarmatian.
Yet still, to confess the truth to you, my Muse
can’t be prevented from composing poems.

Which brings me back to the prompt.  Devotion to writing, especially to the writing of poetry, can feel like a self-imposed exile.

First, there’s the actual writing – which, for me at least, requires some isolation, some (at least mental) banishment from a lot of the “fun” of modern life – TV, going out, the perusal of Facebook.

But even simple devotion to poetry can feel isolating in the modern world.  (Poetry tends to hold itself somewhat aloof from money-making, even from mass popularity.)

And that takes me back to Bloomsday!  One of the reasons it feels special is because it is a day celebrating the writing of someone who was considered obscure, obscene, avant garde, overly-poetic, and who also wore extremely thick glasses.

And though I’m not sure that Joyce is my very favorite writer, it makes me incredibly happy, even joyous, to feel myself part of a small host of people all reading, listening and thinking:  “well as well him as another and then I asked him with my eyes to ask again yes and then he asked me would I yes to say yes my mountain flower and first I put my arms around him yes and drew him down to me so he could feel my breasts all perfume yes and his heart was going like mad and yes I said yes I will Yes.”

So, in the spirit of a Yes to both solitude and community, I challenge you today to write a poem that springs from the theme of exile!  It can be geographic exile, political exile, internal exile (an estrangement of the heart), homesickness, homecoming, etc.  (If none of these work, just write a poem about someone named Molly.)

And in the spirit of all those guys (and a few gals) writing and painting in Paris, I urge you to connect with like-minded souls!  I.e. check out the work of your fellow poets!  Read, enjoy, comment, retweet!

So, if you’re new to dVerse Poets Pub (welcome!), here’s the drill:

Notes: the quote from Ovid about dancing in the dark is from The Poems of Exile: Tristia and the Black Sea Letters, with a new Foreward, by Ovid, translated by Peter Green, by University of California Press. The longer Ovid excerpt was translated by A.S. Kline, and is available with all of the Tristia online.  The quote re “Yes” is from Ulysses, by James Joyce.  The photograph was taken by Berenice Abbot, in the late Twenties; the elephant is by yours truly.

Link to next event https://meet.google.com/uim-ovtf-jjw?authuser=0&hs=122
Join 12,181 other followers