While studying at the University of Wales, I lived in Swansea – Abertawe, in Welsh. Days I would spend working in the laser laboratory, high in the sciences building, optimizing argon-ion-pumped dye lasers and preparing samples of high-temperature superconductors.

My doctoral thesis was on the laser-induced photothermal spectrometry of condensed matter.

In between re-configuring optical tables and preparing photopyroelectric film detectors, I would take in, from the vista of my lab window, the waters off the wonderful swath of coastline of the Gower Peninsula and the Lliw uplands. And yes, write poetry.

For Swansea was no ordinary university town. It was the town where my love of science and literature first blended into the strange alchemy that has become my poetry. And here was inspiration. Here was born the poet Dylan Thomas.

I lived on Sketty Road, in a student house in an area of Swansea called the Uplands. And if I took a short walk from my flat, up to the park near Cwmdonkin Drive, I would come to the house where he had lived.

Thomas’ poetry is acknowledged to be among the greatest written of any time, and few poems are more beloved than that villanelle which has no other title than its first line, “Do not go gentle into that good night”.

Do not go gentle into that good night,
Old age should burn and rave at close of day;
Rage, rage against the dying of the light.

You can read the poem in full, and listen a reading by the poet himself, at the Academy of American Poets’ site, “Poets.org”. 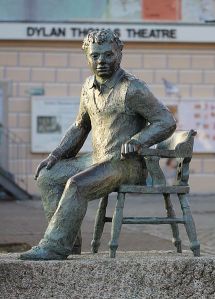 A villanelle is a poetic form composed of nineteen lines. These are arranged as five tercets (three-line stanzas) followed by a quatrain (four-line stanza).

There is no established meter to the villanelle – modern villanelles tend to pentameter, while early villanelles used trimeter or tetrameter.

The most striking thing about a villanelle is that it has two refrains (“A1” and “A2”) and two repeating rhymes (“a” and “b”). The first and third line of the opening tercet are repeated alternately as the refrains, until the last stanza, which includes both refrains.

The Thomas poem illustrates this well, with the opening tercet’s first line “Do not go gentle into that good night” (“A1”) and its last line “Rage, rage against the dying of the light” (“A2”) serving as the two rhymed ( “a”) refrains. The middle line “Old age should burn and rave at close of day” sets up the other rhyme (“b”).

Oscar Wilde and Edwin Arlington Robinson were among the first English practitioners of the villanelle. Early on, modern poets eschewed the villanelle because of its formality and structure.

But poets like Thomas, W. H. Auden, Theodore Roethke, Sylvia Plath and Elizabeth Bishop began composing villanelles, and brought the form to a level of popularity in the latter part of this century, that it had not previously enjoyed.

Swansea panorama and the Gower Peninsula

But, for me, no villanelle was ever able to touch Dylan Thomas’ “Do not go gentle”, written as he had watched his aging father, formerly in the Army, grow frail and weak – and as Thomas had attempted to convince his father to rage, to fight against the death that drew near. For me, this poem is Thomas’ masterpiece.

In Swansea, in the shadow of Dylan Thomas’ legacy, inspired by where he had lived, where he had worked, what he had written, I tried to write villanelles. In vain. Every draft I ever wrote in Swansea was committed to flame.

Years later, in Canada, I was again surrounded by the accoutrements of high technology – monolithic optoelectronic semiconductor chip fabrication labs, robots that traversed nuclear reactors to extract radioactive debris. And finally, like electrons settling in their orbitals, it all came together.

Years later, after having written hundreds of other poems, thousands of other lines, I finally found the right refrains, the right theme, the right voice, in the villanelle “War”.

Why do we keep on marching out to war?
If every fiber in us cries for peace,
Someone tell me what are we fighting for? 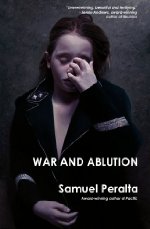 “War” is one of the centerpiece poems of my Kindle book ”War and Ablution” – and with that piece, the villanelle “War”, I could finally look towards Swansea, towards Cwmdonkin Park, and whisper “Thank you.”

Tonight, join me in paying tribute to Dylan Thomas and share a villanelle, new or old – I’d love to see what people do with the form.

As usual, share your work via the link button below, and please, visit your fellow writers to see what they’ve come up with. I’m definitely looking forward to it.

Samuel Peralta – on Twitter as @Semaphore – is the author of five titles in The Semaphore Collection – Sonata Vampirica, Sonnets from the Labrador, How More Beautiful You Are, Tango Desolado and the just-released War and Ablution – all of which hit #1 on the Amazon Kindle List of Hot New Releases in Poetry on their debut. War and Ablution, his newest collection, was released on October 20, 2012, and includes two poems which have been featured on dVerse Poets, “Cento from the Diary of Anne Frank”, and the villanelle “War”.

Copyright (c) Samuel Peralta. All rights reserved. Cover art for “War and Ablution” from “The Murmur of the Innocents 20 (2010)” by Gottfried Helnwein. Used with permission.

Other images public domain / via WikiMedia Commons or as attributed.

104 thoughts on “Form for All: Physics and the Art of the Villanelle”