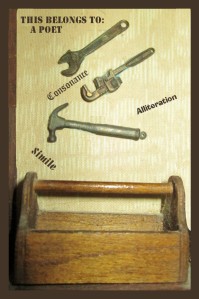 Welcome again to FormForAll. This is Gay Cannon and I have been here bringing you poetry forms since we opened the doors to the pub and prior to that at One Stop Poetry. I wanted to open by letting you know that I am taking a few months sabbatical from the staff here at d’Verse Poets. As many of you know since I took this position I have lived in Port Aransas near the beach on the Gulf of Mexico. I am returning to the Dallas area in Arlington. Moving and closing on the house and getting organized and settled in the other is taking up an inordinate amount of my time right now and I don’t have as much to devote to my poetic passion. I will continue to write and read as I can and hope to return in a few months.

It has been a great honor for me to have hosted this forum and I hope it has been of interest to you to explore these aspects of poetry. The complimentary aspects of poetry have also been covered in Poetics where members of our crew have done a wonderful job of talking about inspiration and viewpoints in poetry.

Over the period of time I have served, we have discussed in this Forum the following forms: Karousels and Weaves; Kyrielles; Quaterns; Than Bauk; Englyns; Pantoums; Petrarchan, Elizabethan and Clarian Sonnets; Huitains; Ars Poetica; Sprung Rhythm; Triversen; Framed Couplets; Triolets; Classical Japanese and Chinese Poetry; French Ballades; Odes; Couplets; Ballads, Carols & Lullabyes; Image, Symbol & Allegory; Man’yoshu Poetry; Stacatto Poems; Etherees, Shape and Concrete Poems; Octains; Tanka; Nonets; Haiku and Senryu, Sestina; Sestina Variations; Ghazals; Rime Royal; Octets; Ottava Rima; Villanelles, Prosody and Free Verse. I have been assisted in these discussions by many fine guest hosts and Sam Peralta. Sam, who has started alternating with me has covered some of these forms in more depth and presented other forms himself. Except for the One Stop and Prosody articles, these have been archived and can be found by searching through FormForAll on this page.

Today I would again like to discuss some of the poets’ “tools of the trade”. Those things that make free verse and poetic forms, well, poetic.

These give words a musical structure. Line length and meter together roughly can be translated as the musical staff of poetry. When you want your music to sing as Shakespeare clearly did but not necessarily rhyme you can employ these devices in free verse or shorter line lengths. They work in prose and within plays to create a song when needed as well as they do in poetry.

We did talk about rhyme then as well. Rhyme can enhance the musical feel and has historically been used as a mnemonic device especially when there were no written records to preserve events through communal memory.

But we have never discussed these other poetic devices in this forum although you probably learned about them beginning in grade school English or Language Arts classes. Nevertheless it could prove useful to review what they are and how they behave. I have used A Handbook to Literature by Thrall, Hibbard and Holman as my chief source for the following definitions:

Alliteration: repetition of initial identical consonantal sounds or any vowel sounds in successive or closely associated words or syllables.

Assonance – Resemblance or similarity of vowels followed by different consonants in two or more stressed syllables. Assonance differs from rime (rhyme) in that rime is a similarity in both vowel and consonant. Lake and Fake demonstrate rime and Lake and Fate demonstrate assonance. Dickinson and many poets use it as a near end-rhyme but many other poets such as Hopkins, Poe, Swinburne, and Dylan Thomas use is to great effect within the lines of the poem. It can enrich the sounds of the line giving it a kind of music even when end rime and/or meter is not employed.

Consonance – The use at the ends of verses of words in which the final consonants in the stressed syllables agree but the vowels that precede them differ, as “add-read,” “bill-ball”, and “born-burn.” Contemporary poets frequently use consonance. In this stanza by Emily Dickinson

A quietness distilled,
As twilight long begun,
Or Nature, spending with herself
Sequestered afternoon,
the linking of “begun” and “afternoon” is an example of consonance.

Diction – The use of words in oral or written discourse.
A simple list of words makes up a vocabulary; the accurate, careful use of these words in discourse makes good diction. The qualities of proper diction are

The manner in which words are combined constitutes style rather than diction which refers only to the selection of words employed in the discourse.

Poetry particularly modern poetry has come to have many voices. Originally as a sort of “song”, it had an elevated tone. These days some devices used in earlier times don’t work – things like forcing rhymes, using inversion and re-ordering sentences, resorting to words like thee and thou, and cans’t since they have gone out of common usage. Today it is best to speak in the natural rhythm of English sentence structure. Poetic language now usually reflects the poet’s own language; nevertheless, diction may be broken into the following levels of usage:

While television, social media, texting, and other ways of communicating have altered ways we speak, it is useful to consider your tone when writing anything. It becomes jarring to begin in a formal manner and then introduce words that don’t continue in that manner such as jargon, slang, or technical words that “stop” the reader. The above levels may be slightly dated; however, it’s wise to consider that word choice doesn’t only communicate but also creates the setting and tone for your work.

Denotation and Connotation – Perhaps this is a good place to talk about this aspect of word choice while talking about diction, usage and style. I am sure all of you know the definition of these words but just for the sake of review, I will define them again. I think it’s useful to consider their meanings anyway. I know at least half-a-dozen fellow poets who feel that consulting a thesaurus (and for some even a dictionary) is CHEATING!

For those of us who write form poems that is unfathomable, particularly as we need them to rhyme and at the same time make sense. More importantly, we need to know the accepted place a stress falls on a word, not just the way we choose to stress it with our own regional accent, in order to employ meter. Yet there are so many more reasons to consult a dictionary and thesaurus. Many revolve around the denotation and connotation of words. Finding the right color and shading as well as the right sound of certain words transforms the poem, in my opinion. It is the difference in being “almost right” and “exactly right”.

Denotation as you remember is the exact meaning of a word, independent of its emotional coloration or usage associations.

Connotation is defined as the cluster of implications that words or phrases may carry with them as opposed to their denotative meanings.

The scientist and the philosopher hold words to their denotative meaning, the poet relies on the connotative to carry his/her deepest meaning.

Style – is a combination of two elements: the idea to be expressed and the individuality of the author. It is for the poet to come to an understanding of him/herself and the topic or material he/she wants to express. Since no two poets are alike, we can then deduce that no two styles are exactly alike. Critical analyses may lump poets in a general “style” such as abstract, impressionist, comic or vivid; however better terms used to discuss poetry would be imagery, emphasis, coherence, arrangement of ideas, structure, variety and diction.

Hyperbole – A figure of speech in which conscious exaggeration is used without the intent of literal persuasion. It may be used to heighten effect or it may be used to produce comic effect.

Personification – A figure of speech which endows animals, ideas, abstractions and inanimate objects with human form, character, or sensibilities, the representing of imaginary creatures or things with human personalities, intelligence and emotions; an impersonation of a person whether real or fictitious by another person. Here Keats personifies the Grecian urn as the
“Sylvan historian, who canst thus express
A flowery tale more sweetly than our rhyme”

Personification as a figure of speech is also call prosopopoeia, and is somewhat related to Allegory.

Simile – A figure of speech in which a similarity between two objects is directly expressed. Generally with this figure of speech, there is a comparison of two things essentially unlike, on the basis of a resemblance of one aspect that unites them. Usually and historically it has been introduced by like or as.

It is no simile, however, to say “My house is like your house” although, of course, a comparison does exist. Similes can be introduced by words other than like and as. In some instances, poets use as if or than. Shakespeare employed simile both in his sonnets and in his plays. One doesn’t have to go much further than “Shall I compare thee to a summer’s day”.

How like the winter hath my absence been – William Shakespeare
As idle as a painted ship upon a painted ocean – Samuel Taylor Coleridge
Jubilant as a flag unfurled – Dorothy Parker
My luv is like a red, red rose – Robert Burns
Gertrude Stein felt she was “freeing” poetry from the constraints and cliché of similes when she wrote,
A rose is a rose is a rose – because the rose had become ubiquitous and overused as both metaphor and simile. The caveat with both is to make your comparisons fresh. Cliché is everywhere and it’s so easy to want to employ it.

Like a carpenter always looking for new and better tools, so poets are always looking for new devices to make their poems better. These are but a few of them. However, since they may have been learned a long time ago, it may be time to take them out and sharpen them up. For today’s challenge, write a poem in your own voice, in your own comfortable style whether it be free or form and take advantage of a few of the devices described here. I haven’t written anything for a while. More stuff is getting packed and by the time you read this, that will include my computer. Take care of yourselves. I’ll see you soon!

77 thoughts on “The Poet’s Toolbox”