Hi everyone!  We are pleased to have Frank J. Tassone as our guest pub host for this week’s Haibun Monday.

Good Afternoon, Poets! Frank J. Tassone here, hosting this week’s Haibun Monday. For those that don’t know, haibun is a form of Japanese poetry that combines prose, or prose poetry, with haiku. And what better topic could there be today for a haibun than Hiroshima Day 2018? 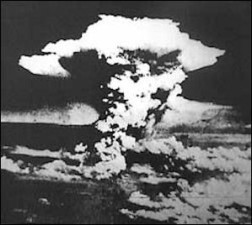 That’s right! Today marks the anniversary of the atomic bombing of Hiroshima. And the city of Hiroshima will once again hold its annual Hiroshima Peace Memorial Ceremony:

…Remembering the 140,000 irreplaceable human lives that were lost, either on the day of the bombing or in the ensuing months, and the numerous atomic bomb survivors who still suffer from its aftereffects even to this day, one cannot help but be left with a strong sense of the horrors of nuclear weapons and a strong hope for world peace in one’s heart.

The Hiroshima bombing has had a profound impact on the world, and poets, among others, have responded. Haiku poet Yasuhiko Shigemoto, for example, has memorialized the attacks with his work:

Other haiku poets have followed his lead:

Hiroshima Day-
I lean into the heat
Of the stone wall

paper lanterns
do you know how many died
at Hiroshima

Let us commemorate Hiroshima Day with our own poetry! This week, I want you to write a haibun that states or alludes to either the Hiroshima attack, or one of the themes of the Hiroshima Peace Memorial Ceremony, such as peace, the abolition of nuclear weapons, or the horror of nuclear war.

If this is your first time, here’s how to join:

Frank J. Tassone is a writer, a teacher, a husband, and a father.

He fell in love with writing ever since his wrote my first short story at the age of 12 and his first poem in high school. His free-verse has appeared in the literary e-zine Pif. His haibun has been published in Failed Haiku, Cattails, Haibun Today, Contemporary Haibun Online (CHO) and Contemporary Haibun, CHO’s annual print anthology. He is honored to be a part of the Image Curve community as a contributing poet. He is also happy to be a performance poet with Rockland Poetry (formerly Suffern Poetry) in Suffern, NY.

He has worked as a special education teacher in New York City High Schools for the past twenty-one years.

He lives in Montebello, NY with his amazing wife, Mira, and their beloved son, Frank. When not writing, He meditates, hikes, practices tai chi and geeks out to Star Wars and Marvel Cinema.

Link to next event https://meet.google.com/uim-ovtf-jjw?authuser=0&hs=122
Join 12,175 other subscribers