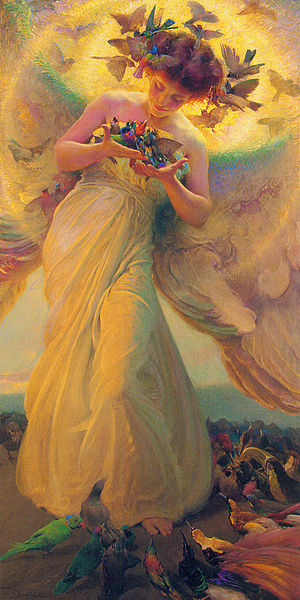 Put aside your fear, laborious poet of the days,
learn what you’re asking about and
hear my words with your mind.
– Ovid, in Fasti

When I first started writing (and reading) poetry at dVerse, someone suggested I obtain a copy of, “How to Read a Poem: and Fall in Love with Poetry,” by Edward Hirsch. I obtained it right away and did make an earnest attempt to read through it cover to cover.  At some point the book was moved to a less-than-prime grabbing position; but before it was I took a look at, “The Glossary and the Pleasure of the Text” at the back of the book. What a treasure trove at my fingertips! Thank you to whomever made the recommendation.

I decided for the prompt today to let my fingers do the walking through Mr. Hirsch’s “glossary and…” until something “hit.” One word that jumped from the page was “vatic.” He says it means, “inspired with the power of prophesy.”

Merriam-Webster says:
Some people say only thin lines separate poetry, prophecy, and madness. We don’t know if that’s generally true, but it is in the case of vatic. The adjective derives directly from the Latin word vates, meaning “seer” or “prophet.” But that Latin root is, in turn, distantly related to the Old English wōth, meaning “poetry,” the Old High German wuot, meaning “madness,” and the Old Irish fáith, meaning both “seer” and “poet.”

Hirsch goes on to say that, “The vatic impulse is signaled in poetry whenever a poet speaks in a prophetic voice beyond the social realm.”

A.E. Stallings said that, “Virgil’s works were … used in the Middle Ages for prophesy by the picking out of verses at random…. but that, “The contemporary poet has largely eschewed any claim to the ‘vatic,’ a mantle many poets a generation or three ago aspired to.”

Donald Hall said, “A premise: within every human being there is the vatic voice. Vates was the Greek word for the inspired bard, speaking the words of a god… We must find ways to let this voice speak. We want to get loose, we want to regress in the service of the ego, we want to become as children. We want to do this not only to make poems, or to invent a new theory of linguistics, but because it feels good, because it is healthy and therapeutic, because it helps us to understand ourselves and to be able to love other people. I think, I truly think, that to clear the passageway to the insides of ourselves, to allow the vatic voice to speak through us, is the ultimate goal to which [humans] must address themselves. It is what to live for, it is what to live by.”

How many times have you felt like someone or something else wrote your poem and you were merely the transmitter? I think this is what we become receptive to and is meant by the vatic voice. I want you to think for a moment how you got to a place where the words were pouring out. Is it a time of day? A mood you’re feeling? A topic you’re passionate about to write on? Is it something you don’t want to examine too closely for fear it will fly away? Has that spark or impetus changed over time? I found the following poem quite entertaining on the subject of my last question:

Art
By Sydney Lea
—for Fleda

I hope he saw me wave

As a recap, the vatic voice of a poet is one that is infused with spirit that comes from another place. That voice has been regarded by some as a sign of divine transmission and by others as a sign of madness.

If you are new, here’s how to join in:
*Write a poem (in any form) in response to the challenge.
*Enter a link directly to your poem and your name by clicking Mr Linky below and remember to check the little box to accept the use/privacy policy.
*You will find links to other poets and more will join, so check back later to read their poems.
*Read and comment on other poets’ work–we all come here to have our poems read.
*Please link back to dVerse from your site/blog.
*Have fun!