If you were here a few nights ago on Open Link Night, you may have happened to glance at my poem, “And You As Well Beloved”.

It was a hint! And if you caught it, you got a head start into what we were doing tonight – ghazals and the ghazal sonnet.

If you didn’t catch the poem, here it is in its present form (I may well still edit this):

AND YOU AS WELL BELOVED
Samuel Peralta

Moonlight cast its perfumed spell, beloved,
Down on me – and you as well, beloved.

Unworthy, I beheld you, veiled; but O
The heavens parted, and I fell, beloved.

I would sweep across the desert rampart
To your side, this thirst to quell, beloved.

I would bind myself to sanctuary
In your arms, embrace this cell, beloved.

God sever this cursed tongue and stitch these lips,
Should I ever say farewell, beloved.

But if that God should turn his back on you –
I would be your infidel, beloved.

For all my soul desires is to be yours,
Your supplicant, your Samuel, beloved. 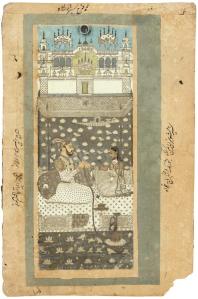 Farrukhsiyar, “Portrait” (1712) with ghazal on verso

Ghazals are beautiful poems, originating in Arabic verse from the sixth century, written traditionally about poetically physical or spiritual love, with a melancholic air of separation or longing.

Made famous in the Western world by the modern translations of works by Rumi and Hafiz, these translations unfortunately have been the source of much confusion over what a ghazal is.

Classic ghazals have a strict form and structure – similar to a Petrarchan sonnet. In trying to be faithful to the ancient poet’s words and expression, translators had to forego the structural framework of the classical ghazal in English.

Imagine trying to translate Shakespeare’s sonnets into Greek, or German, while keeping the iambic pentameter and strict rhyme scheme – difficult, if not impossible!

The valiant efforts led to modern English poems – written in free verse couplets, or even tercets or quatrains, unrhymed, without any semblance of the originally-intended structure – being labelled as ghazals.

When I set out to write a ghazal, I didn’t want that. I wanted to write a classic ghazal.

Though daunting at first, it’s not as difficult as it might seem – and the results can be extraordinary.

Let me explain – and it’s best to use an existing poem as a guide. Let’s use mine, “And You As Well Beloved”.

A ghazal is a collection of two-line poems or couplets (shers) which follow six rules.

First – Each verse or couplet should be readable as an independent poem, which do not have to rely on the other verses, though the full ghazal has a theme – traditionally romantic or spiritual love and longing.

Third – All of the couplet verses must end with the same refrain, which could be a word or a phrase (radif). I used the word “beloved” as my refrain.

Fourth – The words before the refrain phrase must rhyme (kaafiyaa). In my poem, I use words with the end-rhyme – “-el”.

Fifth – The beginning couplet (matla) must repeat the refrain word or phrase (radif) in both lines; hence the repeated “beloved” / “beloved” in my opening verse.

Sixth – The final couplet (maqta) must reference the poet’s name, or alias (takhallus), and sometimes a derivation of the meaning of the poet’s name. This was a traditional way for the poet to sign, or to affix his mark upon, his work.

I was originally going to use “Semaphore” – my poetic nom de guerre – but then hit on the idea of using the “-el” in “Samuel” as the basis for my rhymed words before the “beloved” refrain. Aha! Two birds with one stone.

To quote Abhay Avachat – a poet in Urdu – “Ghazal is a collection of ‘shers’, in which there is at least one ‘matla’, one ‘maqta’ and all the ‘shers’ are of same ‘beher’ and have the same ‘kaafiyaa’ and ‘radif’.” 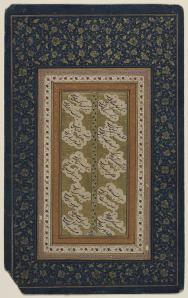 In writing “And You As Well Beloved”, I found that one key to unlocking the structure of the ghazal in English is to first settle on a refrain word or phrase that will help reinforce your theme or atmosphere:
– “beloved”
– “in the night”
– “my friend”

That structure anchors your poem.

Ghazal from the book “Lafzon ki Diwar” in Urdu

In terms of length, ghazals traditionally have at least five couplets and can extend to fifteen, twenty couplets or more.

In my poem, I decided to restrict that length to seven couplets (fourteen lines) and to use pentameter. I call this form a “ghazal sonnet”.

While a few others may have used the term “ghazal sonnet” previously, I believe this is the first time anyone has ever married the classic ghazal structure with a traditional fourteen-line pentameter sonnet structure to construct a new form – a new form with traditional underpinnings.

This makes me happy.

Whirling dervishes at a Rumi Festival

Tonight, in the tradition of the great Persian writers, and the spirit of the Renaissance, I invite you to contribute a ghazal sonnet – or a classic ghazal, if that’s more to your liking – as I’ve laid it out here.

…A follower in the footsteps of Rumi.

Samuel Peralta – on Twitter as @Semaphore – is the author of five titles in The Semaphore Collection – Sonata Vampirica, Sonnets from the Labrador, How More Beautiful You Are, Tango Desolado and War and Ablution – all #1 on the Amazon Kindle List of Hot New Releases in Poetry on their debut.

Read a recent interview with the author and his thoughts on writing poetry on Combustus magazine’s “Samuel Peralta: The Physics of Poetry”

Images public domain / via WikiMedia Commons or as attributed.

94 thoughts on “FormForAll: On Ghazals and the Ghazal Sonnet”

Link to next event https://meet.google.com/uim-ovtf-jjw?authuser=0&hs=122
Join 12,181 other followers