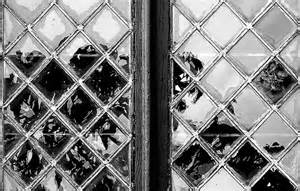 Hello everyone.  A few weeks back Brian mentioned that it would be interesting to write a poem from two different points of view.  I remembered the poem form I invented for my Meeting The Bar challenge to have us poets come up with our own original poems. I invented what I called “falling diamonds.

After I wrote mine I remembered that the verses also looked like diamond shaped  window panes.  It turns out those casement windows with diamond panes are called “Quarrels”. It occurred to me (after having written this poem) that an interesting use of the form would be to devote each diamond to one viewpoint and the next to the opposing viewpoint, a debate, a true quarrel.

I told Brian it might be a good challenge to use this form to present two different points of view considering its name and the form would easily adapt to present two voices or viewpoints.  It also works well for one.  Here’s the poem I wrote in this style:

My eyes
can see the dark
and hidden places where
they meet to steal the wealth beneath
our feet, contaminate the air we breathe.
They play a propaganda game,
extolling wealth that will
be gained as they
disguise
the threat they pose
to water, air, and land.
Distracting us with techno toys
as they position mean machines that tear
the gas and oil from mile deep rocks.
Those profits will enrich
the haughty few
with lives
of Gatsby wealth
insured by covert schemes
while taking it away from those
who need it most. They’re drilling deep below
our homes, releasing side effects –
disease and parasites.
Cabals control
by lies,
denying deeds;
their greed extracts great tolls
on earth and all who dwell thereon.
What they forget is even wealth will not
protect them from the ravages
that they’ve unleashed. They too
may face what they
devised.

Here are the rules for the form that I invented for one subject: It is composed of a series of lines beginning with one line of one iambic foot, then two, three, four, five, four, three, two iambic feet and then again one iambic foot which rhymes with the initial one foot line.

Basically then the form is blank verse that is shaped in diamonds or triangles with one sustaining middle rhyme of one foot. You may choose to add either internal or end rhymes as well. The only requirement is for the one foot lines to rhyme. Hyphenating end words is prohibited. A minimum of two diamonds should be made.

If you choose two opposing viewpoints, I think it would be best if you finished the window pane with a single iambic for that. One that rhymes with the first line; however, it would probably be easier to change the rhyme in each following stanza as it is no longer a bridge to the next stanza. If you center the poem, you would insert a line break and if you right/left alternate,  you would complete the shape.

Also I think another adaptation might facilitate writing an argument.  If the text per stanza requires more than the 50 syllables, I see no reason why one couldn’t add more lines in the same progression building up to a 6, 7, 8, 9 etc. foot line before receding back to the one iambic rhyming foot.  But to make the shape of the poem consistent, the number you choose would have to be repeated in every following stanza for both voices.

So that is today’s challenge. Writing a “Falling Diamonds” poem or come up with an argument or two points of view and dedicate stanzas of “Quarrels” to that debate.  Formatting with one viewpoint left formatted and the other right formatted would give the effect of bulletins, flags, or arrow points. I fiddled around a little with WordPress to see if it would accommodate the formatting.  If you use the QUOTES [” ] box to format, you can place one set left justify, click on another new QUOTES box and right justify, alternating down the page. It does start and end with quotation marks though; so, that might influence your decision.  I haven’t figured Blogger out yet. Of course if you know HTML you can format in code under the HTML tab when composing your post.

33 thoughts on “d’Verse – Meeting The Bar – The Quarrel Form”