My hair is bold like the chestnut burr; and my eyes, like the sherry in the glass that the guest leaves. – Emily Dickinson

Still, is the bustle in the brook –
Sealed are the spicy valves –
Mesmeric fingers softly touch
The eyes of many Elves –

Perhaps a squirrel may remain –
My sentiments to share –
Grant me, Oh Lord, a sunny mind –
Thy windy will to bear!

Her name is known to all, not only those who love poetry but also those who dismiss literature as folly. Emily Dickinson epitomized the drive that possesses all poets. Prolific fails to describe the passion that kept her hand scrawling passages on whatever scraps of paper she touched.

Unfortunately, her life has been characterized as that of a recluse who closeted herself away in her bedroom to write morbid verses. This viewpoint was without a doubt propogated by a non-poet. As poets, we know the experience of existing within creating, the zone that pushes time into a different dimension while creativity and imagination consume our beings as a famished dragon with his tastiest feast. The reality of Emily Dickinson’s life was that she was a serious artist consumed by her passion for poetry. She lived her life doing what she loved. In that sense, she should be envied.

Emily Dickinson was born in 1830 in Amherst, Massachusetts as the middle child of Edward and Emily Norcross Dickinson. She received her education at Amherst Academy and Mount Holyoke Female Seminary. She was a social person in her youth, a trait that receded as she aged. Although she received at least one proposal, she defied convention and remained unmarried.

Dickinson composed approximately 1800 poems with less than a dozen published while she was alive. She frequently shared poetry through personal letters to family and friends yet rarely submitted her poetry for publication consideration. When she died at age 56, her family was surprised to find the treasure trove of more than 800 poems that she had kept completely private. Her material legacy consists of about 2500 poetry manuscripts and 1000 letter manuscripts.

The intimate restrictions of her work might have been influenced by her father’s opinion of poetry as noted in this statement, an exerpt from a letter written by Emily Dickinson to her brother, Austin in 1851:

“We dont have many jokes tho’ now, it is pretty much all sobriety, and we do not have much poetry, father having made up his mind that its pretty much all real life. Fathers real life and mine sometimes come into collision, but as yet, escape unhurt.” – Emily Dickinson

It is in Dickinson’s fragments, scraps of paper with notes and bits of incomplete poetry, that I feel the closest kinship. On my desk, I have a precious, precarious pile of gum wrappers, napkins, cards, envelopes, newspaper margins, and paper bags, all with thoughts that I don’t want to forget. With the discovery of Dickinson’s fragments, history expanded to intrigue and the reader becomes privy to private thoughts. Should anyone discover my fragments, I hope they take time to read rather than label me a slob and discard my “garbage.” 🙂

Amherst College digitized Dickinson’s fragments and made them fully accessible to the public through this link. 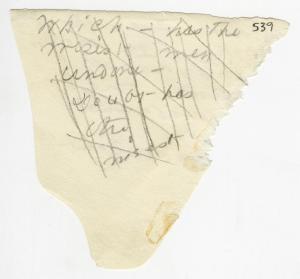 Which – has the
wisest men
undone –
Doubt has
the
wisest

As I draw this mini-biography to a close, I’d like to share one more Dickinson poem that tackles the difficult why question with incredibly unique and stunning comparisons.

“Why do I love” You, Sir?
Because —
The Wind does not require the Grass
To answer — Wherefore when He pass
She cannot keep Her place.

Thank you for joining me for Pretzels & Bullfights. I hope you have a chance to look at Dickinson’s fragments and see the poetry within as well as read some of her lesser known work.

29 thoughts on “Pretzels & Bullfights: like the sherry in the glass that the guest leaves”