It’s been quite the summer so far. Those of us in the Northern Hemispheric regions knew what summer usually has to offer. But the heat indexes have been to extremes. Much of the United States has been experiencing major drought conditions. It’s been interesting here in the northeast where the sound of walking on grass is eerily similar to the sound of crunching snow. So we’ve been going deeply to excess with the  heat and dryness, while holding out a lot of hope for a  major bit of rain. Oh, we’re had a few sprinkles, but those appear to evaporate before it hits your skin.

Now I know, a string of ninety degree days does not compare to the desert areas or places where the high temperatures are the norm. But for a guy who is used to deep freeze and snow in an area not known for its tropical clime, this melange is taking more than a little getting used to!

Claims and prediction of rain become highly arbitrary and exaggerated. You can understand my surprise when this morning had been a torrential downpour, with us anticipating green grass like a child awaits a Christmas morning. Yet, the powers that be claim it won’t be nearly enough to stem the tide. So, it has been either feast or famine; drought or deluge. 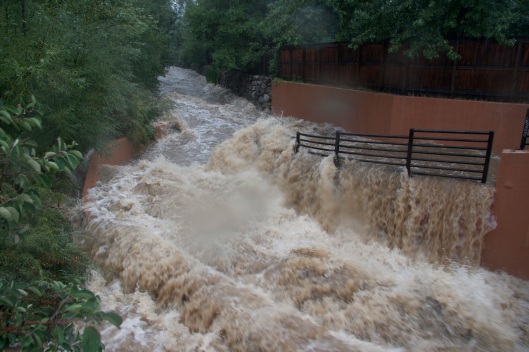 We’re writing one condition or the other. Give us a drought poem (writer’s block would qualify). Or failing that, write the damage of an over-abundance of water/rain (a rain of emotions does nicely here as well), heat, etc… What’s your experience of too much of a thing, good, bad or otherwise? What have you seen or read? Let your poems reflect  some semblance of that! As long as you let the words flow, you’ll never run out!