Welcome back to the dVerse Poets Pub after our two-week break and to the first prompt in a week of celebrating our eighth anniversary. I’m Kim from Writing in North Norfolk and host of this Monday’s Quadrille, when we take any meaning of one word and transform it into 44 poetic words.

After the balmy heat of May and June, the beginning of July has been quite dull here. The word for this prompt came to me as I scanned the heavens for a patch of blue.

Better known as an adjective of colour of sky or shades of that colour, blue can also mean depressed (feeling blue) or indecent (blue movies). As a noun or verb, it is mainly to do with colour (it is one of the three primary colours), pigment and dye, and the indigo powder that was used in laundering.  Some other ‘blue things’ are: the blues, bluish, bluebell, blueberry, blue blood, bluebottle, blue-collar and blue-eyed boy;  blue peter, the signal flag displayed by a vessel about to leave a port; the deep blue sea, blueprint, blue ribbon, bluestocking and blue jeans.

The modern English word comes from Middle English bleu or blewe, from the Old French bleu, a word of Germanic origin, related to the Old High German word blao (meaning shimmering, lustrous). In heraldry, the word azure is used for blue.

According to Wikipedia, ‘the eye perceives blue when observing light with a dominant wavelength between approximately 450 and 495 nanometres. Most blues contain a slight mixture of other colours; azure contains some green, while ultramarine contains some violet. The clear daytime sky and the deep sea appear blue because of an optical effect known as Rayleigh scattering. An optical effect called Tyndall scattering explains blue eyes. Distant objects appear bluer because of another optical effect called aerial perspective.

Blue has been an important colour in art and decoration since ancient times. The semi-precious stone lapis lazuli was used in ancient Egypt for jewellery and ornament and later, in the Renaissance, to make the pigment ultramarine, the most expensive of all pigments. In the eighth century Chinese artists used cobalt blue to colour fine blue and white porcelain. In the Middle Ages, European artists used it in the windows of cathedrals. Europeans wore clothing coloured with the vegetable dye woad until it was replaced by the finer indigo from America. In the 19th century, synthetic blue dyes and pigments gradually replaced mineral pigments and synthetic dyes.’ 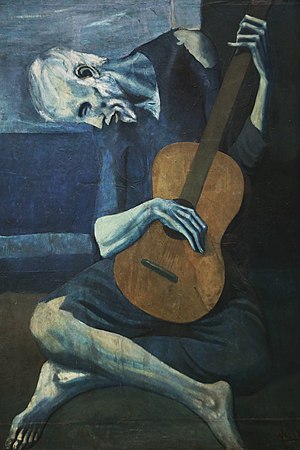 It was also popular with the Impressionist painters and, in modern art, Picasso had a ‘blue period’, in which he used blue as the colour of melancholy, as in ‘The Old Guitarist’.

It will come as no surprise that there is a plethora of blue poems (no – not that kind!). I have found some that are beautiful and interesting.

The first is ‘Fragmentary Blue’ by Robert Frost, a poet whose poems we regularly share and quote:  https://www.poetryfoundation.org/poems/148650/fragmentary-blue

Another is ‘Waking in the Blue’ by Robert Lowell:  https://poets.org/poem/waking-blue

‘The Blue Bowl’ by Jane Kenyon touched me: https://www.poetryfoundation.org/poetrymagazine/poems/36759/the-blue-bowl

You can find even more blue poems in PoemHunter’s ‘Best Blue Poems’: https://www.poemhunter.com/poems/blue/

One of my favourite Joni Mitchell Albums (that’s a lie, I love them all!) is ‘Blue’:

This week, I’d like you to take any meaning, form or compound of the word blue, and write a poem of exactly 44 words (not counting your title), including the prompt word.

– Write a poem of exactly 44 words, including the word blue.
– Put your poem on your blog and link back to this post.
– Link it up to our Mr. Linky.
– Don’t forget to check the little box to accept use/privacy policy
– Visit other blogs, enjoy some amazing poets, and don’t forget to comment or the writers will be blue.  The Quadrille lasts all week, so keep coming back for more!

Link to next event https://meet.google.com/uim-ovtf-jjw?authuser=0&hs=122
Join 12,156 other followers