Hello to All D’Versians gathered for Tuesday Poetics at the pub. Lisa here, serving up liquid refreshments and snacks from the magic cupboard as summer just officially begins.

Please mark your calendars now for Thursday, June 24, at 3pm EST, (two days from today!) for our Open Link Night LIVE. Björn will host. Look for the link in the right column to get there. The link will also be in the OLN Live post on Thursday.

After OLN Live’s fun time of camaradarie, where you can see and socialize with other pubsters, read your poems, and hear them read their poems, dVerse will be taking a 2-week summer break, then returning on Monday, July 12.

All you have to do is write one true sentence.
Write the truest sentence that you know.
― Ernest Hemingway

Recently, I was blessed to be able to borrow the 3-disk, 6-hour documentary series on Ernest Hemingway from the library. It shows the man in unflinching entirety. Wikipedia says:

Hemingway is a documentary film on the life of Ernest Hemingway, produced by Ken Burns and Lynn Novick in 2021 which aired on the Public Broadcasting System in April, 2021. Burns documented both the public and private personae of Hemingway from his birth in 1899 to his death in 1961. It focuses on Hemingway’s writing, his four marriages, three sons, and Hemingway’s peacetime and wartime lifestyle and interests. The film was narrated by Peter Coyote, with Jeff Daniels acting as the voice of Ernest Hemingway.

The top quote has stuck in my mind ever since. I think most of us have used poetry, image, word, and idea prompts to inspire great writing. I also think that the prompts can serve as the “one true” to get us going. Hemingway’s idea sparked the idea for today’s challenge. Although he wrote innumerable short stories, magazine articles, and other assorted formats, he wrote only ten novels/novellas. Ten was a manageable number for me to work with in looking for “one true sentence” from each.

It is very hard to write this way, beginning things backward…
–The Torrents of Spring (1926)

The world breaks everyone, and afterward, some are strong at the broken places.
–A Farewell to Arms (1929)

But why must all the operations in life be performed without an anesthetic?
–To Have and Have Not (1937)

There is nothing else than now. There is neither yesterday, certainly, nor is there any tomorrow. How old must you be before you know that? There is only now, and if now is only two days, then two days is your life and everything in it will be in proportion.
–For Whom the Bell Tolls (1940)

‘It’s gone the way the mist is burned off the hollows in broken ground when the sun comes out,’ the Colonel said. ‘And you’re the sun.’
–Across the River and into the Trees (1950)

Being against evil doesn’t make you good. Tonight I was against it and then I was evil myself. I could feel it coming just like a tide… I just want to destroy them. But when you start taking pleasure in it you are awfully close to the thing you’re fighting.
–Islands in the Stream (started in 1950 but published in 1970)

When you start to live outside yourself, it’s all dangerous.
–The Garden of Eden (started in 1946 but published in 1986)

We made love and then made love again and then after we had made love once more, quiet and dark and unspeaking and unthinking and then like a shower of meteors on a cold night, we went to sleep.
–True at First Light (started in 1953-54, but released in 1999) 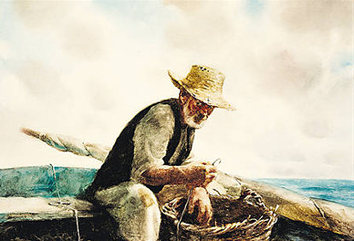 Your challenge today, should you choose to accept it, is to pick ONE of Hemingway’s quotes to be inspired by and write a poem. Do NOT use the quote in your poem, but please do include the quote on your post page somewhere, with Hemingway’s name as the source of inspiration. For bonus points, please say a few words about the experience of writing to an idea from the mind of Papa Hemingway.

Those of you new to dVerse, here’s how to participate:
♦Post any poem of your choosing on your blog or website.
♦Click on Mr. Linky below to add your name and enter the direct URL to your poem
♦On your blog, please provide a link back to dVerse. This enables others to enjoy our prompts, increases our readership and thus increases the responses to everyone’s poems.
♦If you promote your poem on social media, use the tag #dverse poets
♦And most importantly, please do read some of the other responses to the prompt and add a short comment or reaction. Everyone likes to be appreciated! The prompt is “live” for several days – as you’ll notice by the comments you’ll receive – so do stop by another day and read a few of the latecomers too!

Sources:
wikipedia
top image: Hemingway posing for a dust jacket photo by Lloyd Arnold for the first edition of “For Whom the Bell Tolls”, at the Sun Valley Lodge, Idaho, late 1939.
bottom image link