Hello poets, everywhere. I’m Tony Maude and it’s my pleasure to introduce Form for All again. Last time I brought Adelaide Crapsey’s (American) Cinquains to the bar; today I’d like to introduce something a little longer: 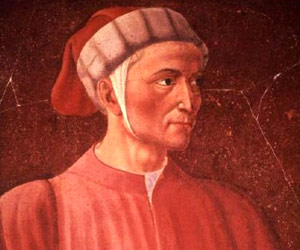 It is believed that Terza Rima – Italian for three rhyme – was invented by Dante Alighieri, who used this pattern of rhyme throughout his Divine Comedy (ca 1300) and, lacking any evidence to the contrary, I will not argue with this. It is commonly held that the form was brought into the English language by Geoffrey Chaucer. Since then, many poets have written English language Terza Rima, from Milton and Shelley to W.H. Auden and William Carlos Williams.

However, the rhyme scheme of Terza Rima has not been universally popular with English language poets. Consideration of Terza Rima’s requirements will give us some indication as to why this might be.

Terza Rima is rhyming poetry written in tercets – that is three-line stanzas. So far, so straightforward, except that in Terza Rima:

Now, is that clear? No?? Perhaps an example will help. Here’s an excerpt from the beginning of Byron’s The Prophecy of Dante: 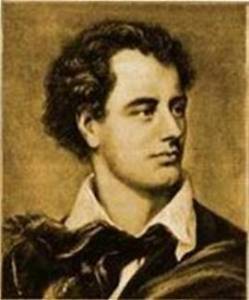 etc, for about 32 pages in this digitized version. Now, at a rate of one page per hour, you should all be able to produce something similar before the Linky expires … smiles.

Seriously, if you are going to write an extended Terza Rima poem, then sooner or later you are going to run out of rhyming words. Modern poets have, and do, use slant- or near-rhymes to get around this issue, but even at that, there are still aren’t too many words which rhyme, even loosely, with purple!

If you do choose to try a Terza Rima epic poem – and don’t let me put you off – then, according to tradition, you need to end your poem with a single line that rhymes with the middle line of your final full tercet, giving you a closing rhyme scheme of yzy z, which is often closed up to form a quatrain.

For the rest of us, let me turn your attention to something just a little less ambitious. At the risk of trespassing on Sonnetmeister Samuel Peralta‘s turf … smiles … let me introduce the star of today’s article …

We all know what a sonnet is, don’t we; fourteen lines, normally of iambic pentameter, to one of several available rhyme schemes. Rather than waffle on endlessly about what a Terza Rima sonnet is, let me show you one instead. This one was written by Robert Frost and published in 1923:

I have looked down the saddest city lane.
I have passed by the watchman on his beat
And dropped my eyes, unwilling to explain.

I have stood still and stopped the sound of feet
When far away an interrupted cry
Came over houses from another street,

But not to call me back or say good-bye;
And further still at an unearthly height,
One luminary clock against the sky

Proclaimed the time was neither wrong nor right.
I have been one acquainted with the night.

You can see the rhyme scheme clearly: aba bcb cdc ded ee. Frost has been extra-clever in this poem. His e-rhyme is the same as his a-rhyme, thus allowing him to close his sonnet by repeating his first line – a neat, but not essential touch that completes the isolating circle of his poem, which is about solitude.

Other Terza Rima sonnets include the five which comprise Shelley’s Ode to the West Wind, and this one by UK Poet Laureate, Carol Anne Duffy, who is one of my favourite poets: 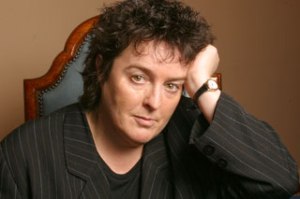 Terza Rima SW19
Over this Common a kestrel treads air
till the earth says mouse or vole. Far below
two lovers walking by the pond seem unaware.

She feeds the ducks. He wants her, tells her so
as she half-smiles and stands slightly apart.
He loves me, loves me not with each deft throw.

It could last a year, she thinks, possibly two
and then crumble like stale bread. The kestrel flies
across the sun as he swears his love is true

and, darling, forever. Suddenly the earth cries
Now and death drops from above like a stone.
A couple turn and see a strange bird rise.

As you were reading this, did you notice how Carol Ann Duffy has played with the Terza Rima scheme slightly to reinforce the point of her poem? There’s an end word that doesn’t rhyme with any of the others. Go on, read it again and you’ll see what I mean.

This week’s Form for All challenge
is to try your hand at Terza Rima. I don’t anticipate anyone will produce a Byronic epic, although I am prepared to be proved wrong, but perhaps you might write a Terza Rima sonnet. So what do you do now? Here’s

How It Works:
• Write your poem and post it to your blog
• Add a link to your poem via the ‘Mr Linky’ below.
• This opens a new screen where you’ll enter your information, and where you also choose links to read. Once you have pasted your poem’s blog URL and entered your name, click Submit. Don’t worry if you don’t see your name right away.
• Read and comment on other people’s work to let them know it’s being read. This is quite a tough challenge so it would be good if you could encourage everyone who rises to it.
• Share your work and that of your fellow poets via your favourite social media platforms.
• Above all – have fun!