Today I would like to introduce my friend, Matt Quinn, known to many of you as poemblaze, his twitter handle; and thank him for hosting today. He is giving us an introduction to a longer poem form, sestina; a form that can yield satisfactory results especially for story telling or works that need more detail.

I am offering a Mr. Linky as I know many of you may have sestinas you have already written and would like to offer. But I believe I will offer the topic again in a month or so for those of you who are trying it for the first time. We can talk about some variations then. It often takes a little time for sestinas to become fully realized.                             Thanks,  Gay

Sestinas are a poetic tour-de-force which takes skill to create and a subtle ear for the sound of language to keep from seeming contrived or stilted.

The sestina repeats the initial six end-words of the first stanza through the remaining five six-line stanzas, and then ends in a three-line envoi. The lines may be of any length, though traditionally a sestina is set in iambic pentameter. The form is as follows: each number indicating the stanza and the letters representing end-words of each line in the stanza:

The envoi, some call it the tornada, must also include the remaining three end-words, BDF, in the course of the three lines so that all six recurring words appear in the final three lines. In place of a rhyme scheme, the sestina relies on end-word repetition, a sort of self-rhyme.
Another element of a successful sestina is choice of the end words. The most successful sestinas usually employ simple words which can be used with different meanings or in different contexts. For example, “earth” can mean the planet or soil or be a stand in for the inhabitants of the planet. Being able to reintroduce each word with a different shade of meaning helps keep the poem from sounding repetitive.

As to the sestina’s history, Arnaut Daniel of Southeastern France is said to have invented the form in the 12th Century. Both Dante and Petrarch pursued the sestina in Italy, holding Daniel in great respect. Over time the sestina lost popularity but saw a great resurgence in the 20th Century, which continues.
“Sestina: Altaforte” by Ezra Pound, “Mantis” by Louis Zukofsky, “Sestina” and “A Miracle for Breakfast” by Elizabeth Bishop, “Farm Implements and Rutabagas in a Landscape” by John Ashbery, “Paysage Moralise” by W.H. Auden, “Toward Autumn” by Marilyn Hacker, and “Sestina: Bob” by Jonah Winter are all excellent examples to compare and contrast. Some hold strictly to iambic pentameter, others are more free. The character in Pound’s poem propounds the merits of war and Ashbery plays with Popeye cartoon characters. Despite its structural limitations, this shows how diverse a range of topics and of approach one can take to the sestina. I suggest reading all of these to get a sense of the possibilities of the form.

Others can judge how well it achieves as a poem, but this is the sestina I’m most content with having written. I also don’t have to worry about copyright issues in sharing it. 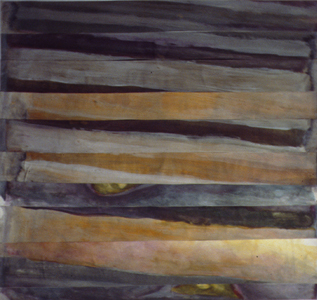 Dark soil lies bare. Plow furrows disgorge stone
tools—arrowheads lashed upon shafts to spring
from bow to bird, grounded in dry leaf bed
of forest later felled and left a field.
The land subdued, nothing remains to earth
but what we, reaping, leave in our long wake.

Chert, flint, and onyx: ancient voices wake
to my touch; smooth, cool language locked in stone.
Layers of time stirred, overturned; the earth
has no peace. Gnawing wind, relentless spring
rains, the plow, disc and harrow strip this field
of life. It erodes, dwindles down to bed-

rock. Distant day shall see the ocean bed
unearthed. Mollusks, anemone shall wake
from ages’ slumber. Fish shall dart this field
through blue breeze as cold sea currents. Though stone
insinuates their forms, the liquid spring
shall swirl them loose, returned from deepest earth

to dance their rainbow flash or breathe mute earth
tones, sea sponge blending with the sand. Their bed
disturbed, the dead rise up. Key to clock spring,
all begins anew. The funeral, wake
and hearse which send us sleeping under stone
are blind to stirrings which scatter afield

all spirits. Lark and salmon swim sky field
and wing the ocean depths. Both hover earth,
shun soil which drags under, presses to stone
all living. Bright green garden, flower bed:
the tremulous, dewed, bejeweled and wake
to hope rise yearning toward sun each spring.

As water from the stone each self shall spring
up from its bed and live its given field.
We walk earth with the ages all awake.

I tried to use simple words at the end of each line, words that wouldn’t demand attention, so the lines would seem more natural. Also, I used words that could hold multiple meanings and be used in different ways. I did stretch the form at a couple points, using the bed- / rock break. My intent there was to show the life forms in the bedrock breaking loose, visually. Also the very last word in the poem “awake” is not “wake” but near enough I risked the break from form.

Since it is, if employing the traditional iambic pentameter, a longer form than some others, it is a chance to explore broader themes and the repetition of words can be a help, keeping the writer from straying too far from the topic at hand. Reducing the number of syllables per line makes the poem more of a challenge, because the fewer the words, the more those repeated end words stand out.

Here are a few basic suggestions when starting out on a sestina. Use concrete nouns and active verbs as your six repeated words. If the words seem to be driving the poem instead of an idea driving the words, you may need to start from scratch. Some find it helpful to list the words in their proper order for each stanza on the left margin of the page, giving you a guideline. If you find a later stanza seems more suited to be the start of your poem, you can just push it to the top with its following stanzas trailing, and you will still have the pattern intact.

Enjoy the sestina. Though it is a challenge don’t let it intimidate you. Consider it a game. If you achieve a successful sestina that is fine, but what is most important is you continue writing, sharpening your skills, learning each day more about your unique voice.
—
Matt Quinn
http://poemblaze.wordpress.com
http://poemblaze.tumblr.com