Note: This essay originally appeared almost exactly one year ago, as an invited article on One Stop Poetry, an institution, but alas no longer accessible. In celebration of the anniversary, I’m reissuing an updated version of the essay as the first of a series on FormForAll that I plan to do, on free verse. – Samuel Peralta

When I began thinking about what I should say about vers libre, free verse, I scanned through my online poetry blog to find this piece, “Solstice”. I’d started this work years ago; only very recently did it finally find its way to this voice.

The hand loses its hold upon the reins.

Across the veins of sky the sun courses,
sweating the glistening sweat of horses
mouthing the wind.
About the surging manes
the muscles arch, flinging the feeble strain
of arms around the rebel neck away.

Incarnadine the waters of the bay,
shrouding the ashen soul that tried to tame
this sun, to twist the whip across the skies.

Turn away the eyes that look up and drown
in the roar of the edging night. Slower

than a falling feather, the evening dies,
a shudder eclipsing the sun.
Lower
O Icarus, O Icarus come down

At first glance, this looks like free verse, but it isn’t – it’s a sonnet masquerading as free verse. Read it again!

The end-line rhymes are the first giveaway; but I’ve used a number of devices to camouflage the form while staying truer-to-form than some other modern sonnets.

Some of these devices include two mid-line breaks to disguise the number of full lines (fourteen); an irregular, non-iambic rhythm to mask the line lengths (pentameter); differing numbers of lines per stanza to break up the double quatrain-tercet rhyme structure (ABBA-ACCA DEF-DFE), and using numbered sections to separate the Phaethon and Icarus episodes.

I love free verse; a majority of my work isn’t structured around formal verse forms like the sonnet, villanelle, sestina or pantoum. I hold with T.S. Eliot’s view that “no verse is truly free” for a writer who wants to do “a good job” – though “Solstice”, as a camouflaged sonnet, is admittedly an extreme example of this.

But here I’m approaching free verse as a workman’s craft, and not simply a mode of instantaneous emotional expression. And there are writers out there who can let loose stream of consciousness compositions that are stunning – to those who can do this, I bow; I’m just not capable enough to do this. I have to work at it.

It’s been said that Pablo Picasso, at 17 years of age, could paint as wonderfully as the old masters – and thus he freed himself to explore his own, unique, idiom. It’s the same idea.

For poetry this foundation of modernism on the classical – to run the risk of over-simplifying things – is about two things: collecting tools, and bending the rules.

The fundamental basis on which poetry is formed – which helps differentiate it from prose – is the same for formal or free verse. It is a musicality of line, despite the absence of music.

The tools that help one achieve this are many: rhyme (end-line or internal), rhythm, onomatopoeia, alliteration, enjambment, word and phrase repetition, pacing, these are just some of them. Picasso’s evolution into cubism was effective because he had instilled himself with the devices of the movements that had gone before.

The trick of the craft, if there is one, is to be able to use these techniques intuitively. Use them too consciously, and your free verse composition sounds stilted. However, if you are so familiar with these tools that they arise – as if by magic! – as you write, then you might amaze even yourself. And the only way practical way (at least that I know) is to practice using all these tools in formal verse.

You need to understand the rules in order to bend them. In the America’s Cup yachting competition, the rules specify quite clearly the kind of boats that can compete – defining overall length and hull displacement, for example.

But the history of the America’s Cup has been one in which the winner has, by understanding the rules, bent them to his benefit. Winged keels and fiberglass hulls are just two examples of winning innovations that sprung from a clear understanding of the rules. 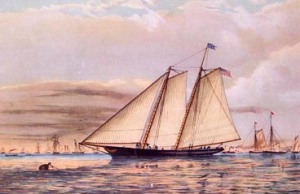 The trick of the craft, again, is not just breaking the rules just for the sake of breaking them. It is understanding the rules, so you know how you can bend them to the best benefit of your poem.

What I struggled with in “Solstice”, for example, was that the theme of ambition, using a sun metaphor, had two strong archetypes I could use – Phaethon and Icarus – and I wanted to use them both, at the same time.

Exploring this in pure blank verse – which I did when I first started writing the poem – I had a difficult time uniting the two archetypes, they always seemed to belong to two different poems. However, by bending (or breaking) the sonnet form, I was able to use the structure to unite the disparate but similar myths.

In the end, it is all about using the best means to express your poetry… So the next time you sit down to write, and your poetry begins to take the shape of free verse, see what happens if you remember Picasso, and America’s Cup.

The invitation is to write your own free verse poem that is not really free verse. It can be a sonnet, haiku, triolet, tanka, anything – but disguise it so that it doesn’t look like a structured poem.

Post your poem on the linky below, and please visit the sites of a few other poets as well. You never know what high art you might find. Perhaps even a Picasso.

99 thoughts on “FormForAll: On Free Verse, Picasso, and Yachting”