It’s All Hallows Eve here in the US and to celebrate I thought we might indulge our wild sides. We’ll set our work ablaze, creating a bonfire that we might otherwise caution ourselves against. Entering our subversive nature, avant-garde tendencies, as an exercise in expanding what’s possible in our poems, to help loosen cultural taboos/semantic restrictions to find something wild and alive in our poetry. Stir the cauldron if you will. This post continues some of what’s discussed in my earlier entry on experimental poetry but may also be seen as a continuation of the excellent introduction Gay gave us to the Beat poets. 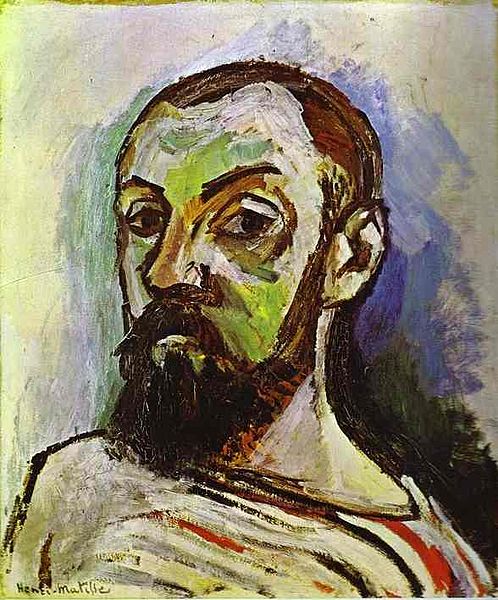 When les Fauves, French for the wild beasts, made their entrance upon the art world stage of the early 1900s they created quite a stir with the use of vivid colors and simplistic figuration. With their wild brush strokes and abstract backgrounds they were inspired by a turbulent emotionalism. As a break from Impressionism this new exploration was about spontaneity and color. Matisse, the group’s most prominent member said of his mentor Moreau, “He did not set us on the right roads, but off the roads. He disturbed our complacency.”

Fauvism is considered an avant-garde art movement. Seventy five years earlier Olinde Rodrigues in his essay “The artist, the scientist and the industrialist” had called on artists to “serve as [the people’s] avant-garde”, insisting that “the power of the arts is indeed the most immediate and fastest way” to social, political and economic reform. While we may look upon this assertion now as a somewhat naïve view of the power of the arts to affect change in the world, it was a driving factor in avant-garde movements as late as the 1960s. Poetry has been late to the widespread employment of this still radical idea of experimentation but has made some inroads over the past decades.

Part of this delay may be explained by language’s foundation in symbolism. As outlined in this wonderful article at the Poetry Foundation:

If a language is going to support a highly literate culture, rhetoric scholar Richard Lanham has argued, then the language itself must be made of simple parts. That is, the characters that are the building blocks of language must be easy to comprehend and the calligraphy unobtrusive. This is because a reader must be able to internalize an alphabet and effectively look “through” the characters to the meanings they convey. For example, when reading a book, one is often not aware of looking at marks of ink on paper. One is much more aware of the ideas that live under the surface of the words.

This typographical philosophy—simplicity, clarity, transparency—has dominated print culture since the advent of the printing press, Lanham argues. But the twentieth century saw several movements in art and poetry that called this philosophy into question, using typography itself as a medium for meaning, preventing people from looking “through” words and forcing readers to look “at” them.

The Italian Futurists, for example, led by F. T. Marinetti’s 1909 manifesto, began to reject traditional expressions of art and literature as “second-hand clothes.” Among their many targets was the book itself, which Marinetti called “stale” and “oppressive,” a symbol of the old guard that the Futurists were working against. “In a literate culture,” Lanham wrote in The Electronic Word, “our concept of meaning itself…depends on this radical act of typographical simplification. No pictures; no color; strict order of left to right then down one line; no type changes; no interaction; no revision. In attacking this convention, Marinetti attacks the entire literate conception of humankind.” Marinetti began experimenting with unusual typography, creating poems that were simultaneously textual and visual, such as the 1919 work “SCRABrrRrraaNNG.”

Around the same time, Dada was gaining strength as a coherent artistic movement in Europe. Also a rebellion against traditional art forms, Dadaists were concerned with spontaneity, automatic writing, and chance operations. Collage became an important element in both art and poetry, as did typography.

If you want to get really out there in your experimentation/flirtation with the subversive you can follow Gary Sullivan’s lead and participate in Flarf which he defines as:

Flarf: A quality of intentional or unintentional “flarfiness.” A kind of corrosive, cute, or cloying, awfulness. Wrong. Un-P.C. Out of control. “Not okay.”

Flarf (2): The work of a community of poets dedicated to exploration of “flarfiness.” Heavy usage of Google search results in the creation of poems, plays, etc., though not exclusively Google-based. Community in the sense that one example leads to another’s reply—is, in some part, contingent upon community interaction of this sort. Poems created, revised, changed by others, incorporated, plagiarized, etc., in semi-public.

Flarf (3) (verb): To bring out the inherent awfulness, etc., of some pre-existing text.

Flarfy: To be wrong, awkward, stumbling, semi-coherent, f***ed-up, un-P.C. To take unexpected turns; to be jarring. Doing what one is “not supposed to do.”

Or you could participate in Pataphysics via the methodology of Oulipo, the workshop of potential literature, championed by a loose gathering of (mainly) French-speaking writers and mathematicians, which seeks to create works using constrained writing techniques. These techniques are particularly familiar to poets as the poet is often bound by some condition that forbids certain things or imposes a pattern. Founded in 1960 by Raymond Queneau and François Le Lionnais the group defines potential literature as “the seeking of new structures and patterns which may be used by writers in any way they enjoy.”

Constraints are used as a means of triggering ideas and inspiration, most notably Perec’s “story-making machine”, which he used in the construction of Life A User’s Manual. As well as established techniques, such as lipograms (Perec’s novel A Void) and palindromes, the group devises new techniques, often based on mathematical problems, such as the Knight’s Tour of the chess-board and permutations.

In my own work I have an ongoing flirtation with a somewhat ambitious desire to write what I would call ‘nonrepresentational poetry’. In visual art, nonrepresentational is defined as not resembling or portraying any object in physical nature. One of my generous readers commented: ‘Wow, it’s like having cerebral seizures manifest within the write’. These attempts are more or less successful but without them I wouldn’t infuse new ideas and life into my less wild work and I wouldn’t learn how to circumscribe the limitations of poetry as an expressive art form.

these property lines in space
each a bounded deontology
a tetra pylon, cartography with no names

obedience is a breath taken without prophesy
disconnecting a wilderness unfettered by human desire,
an undertow on volcanic shores

Whatever you decide to do, dip your toes into the river of avant-garde art for inspiration, employ chance operators or collage, create a monster of a stitched up poem like you’re a modern day Dr. Frankenstein, or simply channel your wild side as a subject, I hope you’ll have a howling good time at the pub. Trick or treat.

• Copy the direct link to the URL and paste it, along with your name, in the Mr. Linky at the bottom of this post.

• Engage in community building, a primary principle here at the pub, by investigating the work of others, reading and commenting. One of the best ways to become a better poet is to read and reflect on the work of your peers. Please provide positive, constructive feedback and appreciation. It’s how we show respect for one another at the pub.

• Share your work and that of others on your social networks. Encourage other poets to join us here at the pub.