Welcome poets, today I thought we should learn about kennings. A kenning is a very brief metaphoric phrase or compound word and it means “to know” (derived from Icelandic, but exist in many other languages like Swedish and German). It was used extensively in Old Norse (later Icelandic) and Anglo Aaxon poetry as a mean of adding both color, and better meter to the skaldic songs. For instance “whale-road” was used as a kenning for the sea in Beowulf, and “wave-stead” replaced ship in Glymdrápa. 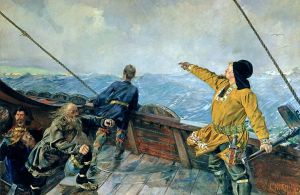 It could be formed around a genitive or directly as a compound word in English we can use a hyphen, and it’s normally done by combination of nouns. In Nordic languages compound words are freely formed by writing them together. It’s actually still used in many languages to form new words. Consider for instance “fernseher” for television in German (meaning view from afar), or “couchpotato” for a lazy person watching too much TV. A language that evolves, constantly need new words.

Today I want you, dear poets, to create new kennings and use it in your poetry. The process is simple, just consider something you want a new word for and create one or several kennings for this. It can then form an ode, a riddle poem or any type of other poetry. There are examples to find at several places in the internet. But before doing that, I can give you an example I wrote a few weeks ago, where I at least partially used the process of kennings to write a poem celebrating International women’s day (March 8).

Today is women’s day,
like every day should be

Usually you start with a base word, that have some relation to what your meaning and then you add a descriptive word. Let yourself associate freely and include all your fantasy in the creation and don’t hesitate to mix senses (Viktoria’s article on Synesthesia and Brian’s on the blind poet can be further inspiration if you missed them). Also the use of Mythology could be a good way to create association (Thor-hammering would for instance be thunder). The combination of two words become a kenning. For instance “butterfly-charmer” for woman. If you want more tips, you can also use the tools suggested by Tony in his article on the Nerudian Ode. Just remember to keep the metaphors to only two words. Rather add many kennings to create your complete imagery.

96 thoughts on “Kennings – the metaphor of Skalds”