Hello poets and friends. One of the fun thing about going back to school a little is to learn some theory behind writing. One of the concept we have gone through is the concept of defamiliarization (and this is not about divorce) It was defined by literature critic Viktor Schklovski (1893-1984) in 1917 in an essay called “Art as technique”, and has had tremendous influence on 20th century literature. It had been used a long time before, but pointing it out we can actually start to use it consciously.

Schklovski starts out by reasoning that many things we do and see we only register subconsciously, and to some extent they do not even exist if they are never noticed. We as poets train a lot on seeing and observing, and then we use our poetic language to convey the same feeling as if we saw this familiar things for the first time. Or as even Coleridge said:

“To carry on the feelings of childhood into the powers of manhood; to combine the child’s sense of wonder and novelty with the appearances which every day for perhaps forty years had rendered familiar [. . .] this is the character and privilege of genius.”

Shklovski goes as far as saying that without defamiliarization there is no art! no poetry, he also says that poetry has to be difficult to read.

In his essay Shklovski exemplifies from the work of Tolstoy three techniques that can give this effect: 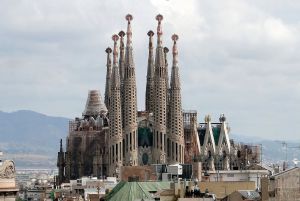 I know that many of our prompts here are actually example of using this technique (for example Dead Man’s poetry, or Marina’s poetics from this Tuesday), but today I would like you to think carefully and describe a familiar object or situation using techniques so we as reader are forced to see them in a new way, And remember it does not matter if it is cryptic or hard to understand. You are the magicians to make us — the readers — react. After all already Aristoteles said: “poetic language must appear strange and wonderful”.

Examples of defamiliarization can be found both before the term was coined and afterwards. Today I will not give any example at all, but urge you to present the familiar in a new way so it feels new, and many of the techniques used in the past have become part of what’s familiar.

As an example from architecture think about your poem as Gaudi think about a cathedral when starting the process of creating Sagrada Familia. It is a cathedral, yet it is something entirely new, that let us see a church in a new way.
Come join the fun and write your own poem, and when you are ready link up with us.

40 thoughts on “Defamiliarization – Meeting the bar”

Link to next event https://meet.google.com/uim-ovtf-jjw?authuser=0&hs=122
Join 12,148 other followers