Hi fellow poets! Gay Reiser Cannon here, who will be hosting the next poetry form.   I know its been a while since you have seen me here.  I have missed being a moderator on dVerse but life has a way in taking us in lots of different directions. I am somewhat lazy about my poetry these days, writing only little ditties on greeting cards and reading old correspondence.  I am active again in figure skating.

Grace and Bjorn have asked me to host this article written by my good online friend, John Alwyine-Mosley.  He has been teaching abroad for the last few years “on the continent,” and away from his home in Englance for long stretches of time.  As you can see in this article, he is quite a good teacher.  I have written a new poem in this form in my blog and I hope you have fun with this form. The form has subtleties just as Haiku does and what seems easy at first becomes challenging in the end.  So here is a repost of his post on August 7, 2011.  Enjoy!  @Beachanny   – Gay Reiser Cannon

Our guest host for FormForAll today is John Alwyine-Mosley. I am honored to present his excellent article on Ghazal. I found it informative and inspirational. Please enjoy.

Origins and its introductions to Western Poetry

The Ghazal, pronounced gah-ZAHL, has seventh century roots and 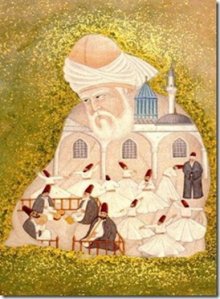 was originally named after the Arabic word meaning ‘the talk of boys and girls’. So it has always had a strong association with unrequited love be it a lover or God. And as both can make you intoxicated  it also very quickly celebrated, ahem, wine and drinking.  But it’s not possible  to fully understand ghazal poetry without at least being familiar with some concepts of Sufism. All the major historical post-Islamic ghazal poets were either avowed Sufis themselves or sympathizers with Sufi ideas. Most ghazal scholars today recognize that some ghazal couplets are exclusively about Divine Love (ishq-e-haqiqi), and others are about “earthly love” (ishq-e-majazi), but many of them can be interpreted in either context say like the Songs of Songs in the Hebrew Bible. The classical Persian period was around 1100- 1500 with famous poets such as Hafiz (1352-89) or Rumi (1207-73) . This is one of Rumi’s ghazals based on a translation by Nader Khalili.  The American poet Robert Bly translated Rumi’s ghazals in his book, Night & Sleep if you want to read more.

What Do You Think Will Happen?

If you pass your night and merge it with the dawn
for the sake of the heart, what do you think will happen?

If the entire world is covered with the blossoms
you have laboured to plant,what do you think will happen?

If the elixir of life that has been hidden in the dark
fills the desert and towns, what do you think will happen?

If because of your generosity and love
a few humans discover their lives, what do you think will happen?

If you pour an entire jar filled with joyous wine
on the head of those already drunk, what do you think will happen?

Go my friend bestow your love even on your enemies.
If you touch their hearts, what do you think will happen?

Although the Persian tradition  is important,  influences in the middle east from Turkey to Pakistan  played a major role in keeping the form alive and part of popular culture.  Ghalib (1797-1869) is the master of the form in Urdu. Many are set to music – musicians such as Ravi Shankar popularized the ghazal in the English-speaking world during the 1960s. Or they can be part of a traditional mushaira gathering where the audience and poet read and react to the lines building up to the climax set in motion by the first couplet.  Get it wrong and the poet is booed off the stage – imagine interactive slam and performance poetry!  I’ll come back to contemporary development in ghazals later.

Western poetry was introduced to the classical Persian form by the German Romantics who were inspired by Hafiz’s joy of living especially Goethe (1749-1832) in his collection The West-Eastern Divan.   Here is a Ghazal from that collection.

YE’VE often, for our drunkenness,

Blamed us in ev’ry way,
And, in abuse of drunkenness,

Are wont to lie till day;
And yet I find my drunkenness

That maketh me its prey,
Which night and day, and day and night,

My heart must needs obey,–
A heart that, in its drunkenness,

Pours forth full many a lay,
So that no trifling drunkenness

By night-time and by day,–
How god-like is the drunkenness

That maketh me its prey!
It’s poetry Jim, but not as you know it

Ghazal’s are associational  and not linear.  To understand this, think about someone you love.  Now list all the day-to-day things you like and would miss about them, even the annoying ones, on separate post-it notes.   Be as concrete as possible – when she tickles my neck with rouge lips, for example. Now fold these up in a hat, shake and then draw one out at a time randomly. In keeping with the pattern set by the poet (I’ll explain this more in a minute) write a couplet in any tone, and in any style inspired by that note. It could be comic, tragic, romantic, religious, political and so on. And remember each couplet stands on its own feet. They could be all thrown in the air and read in any order. Imagine it as one of those montages where individual images combine to make up the bigger picture. Or look at them as the notes and melodies that make a piece of music enjoyable as a whole. The unity of a classical ghazal built up by variations on its chosen subject and theme as well as the rhyme, refrain and metre used.

So how do you write one?

Persian and Urdu metre is based on sound units composed of long vowels and consonants and how it’s pronounced in a public reading. Stresses can fall wherever the quantitative pattern used suggests. Hence, in English you can write the couplet based on the number of syllables per line or in iambic pentameter keeping roughly the same pattern per line set from the beginning. It’s roughly, because what matters is the sounds and cadence when read aloud! Or even sang as Ghazals are important classical musical forms  throughout the middle east.

Traditional Ghazal rules of form are very clear. The opening couplet is called a matla, which sets up the rhyme scheme (qaifa) and refrain (radif) by having it occur in both lines. Then this scheme occurs only in the second line of each succeeding couplet for at least five additional couplets and in practice as many as needed. To end the ghazal, the poet has a signature couplet, the (makhta) in which they mention their name or refer to themselves say like Goethe did in his poem that you read earlier.

Couplets are usually complete sentences; internal caesuras are fine but not an enjambment.

The narrator is nearly always a hero longing for the unobtainable be it wine, lover, God or freedom so its voice is passionate, mystical, bawdry,  or political and delivered to engage the audience. Translating  ghazals like any poetry from their original language to English is daunting. Aijaz Ahmad’s Ghazals of Ghalib; Versions from the Urdu, shows how various  contemporary  poets worked with literal translations  to inspire their own poetry.  However, here is a ghazal written in English by the American poet John Hollander that Agha Shahid Ali, one of the leading experts on the Ghazal, argued was the first authentic English approximation of the form.  Sadly Ali died in 2001.

For couplets, the ghazal is prime; at the end
Of each one’s a refrain like a chime: “at the end.”

But in subsequent couplets throughout the whole poem,
It’s this second line only will rhyme at the end.

On a string of such strange, unpronounceable fruits,
How fine the familiar old lime at the end!

All our writing is silent, the dance of the hand,
So that what it comes down to’s all mime, at the end.

Dust and ashes? How dainty and dry! we decay
To our messy primordial slime at the end.

Two frail arms of your delicate form I pursue,
Inaccessible, vibrant, sublime at the end.

You gathered all manner of flowers all day,
But your hands were most fragrant of thyme, at the end.

There are so many sounds! A poem having one rhyme?
– A good life with a sad, minor crime at the end.

Each new couplet’s a different ascent: no great peak,
But a low hill quite easy to climb at the end.

Two-armed bandits: start out with a great wad of green
Thoughts, but you’re left with a dime at the end.

Each assertion’s a knot which must shorten, alas,
This long-worded rope of which I’m at the end.

Now Qafia Radif has grown weary, like life,
At the game he’s been wasting his time at. THE END.

Contemporary Ghazals explore more subjects, are experimental with the ‘what and where’ of rhymes and refrains and don’t have a formal signature couplet. However, they do keep to single line couplets, pay attention to cadence and are associational. Here’s one by Natasha Clews:

I want my skin burned to the color of melted brown sugar
and to walk on dirty shores through washed up brown beer bottles.

I want brown cardboard boxes filled with cobwebs of junk
and old books with torn and chewed brown edges.

If the leather on my coat and shoes are the brown of a dead animal
and the cracks and bubbles on my car are that same brown rust.

I can feel this brown in living  tree trunks then
and it suffocating the white show, with smears of brown.

I fight and tear my way from this brown shell of a house
and search for brownies, or chocolate bars, sweet brown smells.

But brown paper bags and too tall brown carpet grass keep me down
like a swamp or a net made of tangly, matted grey-brown hair.

Leave me in a brown ocean puddle of earth worm mud
but don’t try to tell me brown’s not my color.

Note:    You can also refer to another Ghazal post that was hosted by Sam Peralta here.

Enough of the talking let’s do some walking.

About our guest host:  Gay Cannon

Born July 23, 1942 in Kansas City, Missouri. I have spent most of my life in the state of Texas and I have lived in many of its cities – Amarillo, Lubbock, Dallas, Arlington, Fort Worth, Houston, Port Aransas near Corpus Christi, and have visited a vast number more.

I have written poetry since junior high. I became serious about it college. I have written all my adult life and was for about six to eight years a moderator of OneStopPoetry which melded into dVerse Poets.

My blog lists the things I like – poetry, music, dance, the arts all kinds, books, theater, fine arts, movies, sewing, gizmos, tech stuff, science and of course the one that won’t let me go: figure skating. I was a figure skating mom, an organizer, an officer, a USFS figure skating judge, and have once more resumed being President of the Lone Star Figure Skating Club.

My goal is to make our club viable and successful again, and to be diligent in getting more of my poems published. I am grateful for all who have come to my blog and read my work there.